Reports based on actual experiences – Progressive lenses that incorporate neuroscience –

We conducted a trial on the “Resonas” spectacle lenses for both near and far distances, which offer a better sense of fitting and are the first lenses in the world to incorporate neuroscience in their designs. Here is a report based on actual experiences.

First is some of the representative positive feedback from customers who actually tried them out.

Below are reports based on actual experiences. 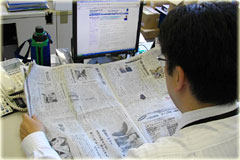 I first tried them out in my room and my initial impression was that the space around me felt broader. There is no sharp line between where I can see clearly and where I cannot, but it seems as though my vision has broadened both vertically and horizontally because of less shaking and distortions in the surrounding parts when compared with my previous eyeglasses.
This is why they all feel that their vision has become wider. Next, we did a comparison with a newspaper spread out on a desk to check vision in areas right in front of us.
I looked for spots with a good focal point while slightly moving my face up and down when using my previous progressive lenses.
However, my vision became significantly broader vertically without having to change the direction of my face with the Resonas and I was able to read the newspaper from the spot directly in front of me to the top without having to search for it by intentionally redirecting my vision.
My vision became slightly wider horizontally, but slowly became blurred when facing towards surrounding areas.
Perception of areas right in front of the user may feel broader because the range of vision that looked elliptic is now shaped like a huge rice ball.

I then discovered something unusual after using the Resonas for an hour. It feels as if the load behind my eyes has disappeared or that my head has became less weighty.
I used to feel some kind of load behind my eyes and thought that it was normal, but began to feel that this was some sort of warning about the pressure that was being placed on my eyes.
Therefore, this new sensation may indicate reduced stress on the brain.
I had no problems with my previous eyeglasses, but definitely did not want to go back to them after trying out the Resonas.
Perhaps it would be difficult for you to notice the benefits of Resonas lenses after giving them a try if it is your first experience with progressive lenses because they offer vision that is so natural. 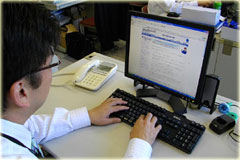 I can truly recommend these lenses not only to people who find it hard to get used to progresssive lenses, but to all senior users as well. Please consider giving them a try.