TOKAI will think and suggest together with the retail shops, to find the best solution for various inquiries, needs, and wants, to obtain the satisfaction of each user.

Within the various kinds requests for multifocal lenses such as progressive addition lenses and bifocal lenses, there are users whom insist in wanting to see the near vision in a wider vision field.

The “Franklin Lens” is one of the solutions for these kinds of requests. This type of lens is a type of executive lens (Ex type lenses) in more general.

This is a type of lens in which four pieces of lenses in total are made and combined into a single pair of lenses. All of the four lenses are single vision lenses, 2 for the far vision for both the R and L eyes, the other 2 made for the near vision of both the R and L eyes. Each of these lenses are then cut in half to be fit and fixed into a single pair of frame.

Here below is the picture of the actual lenses. You can recognize the line in where the four lenses are combined. 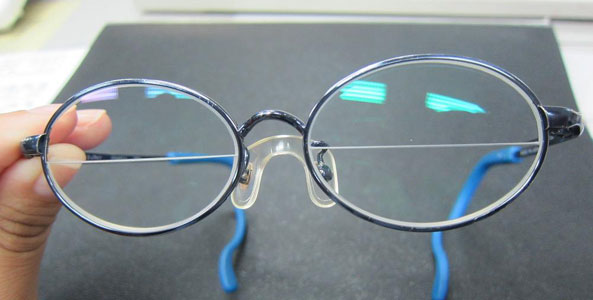 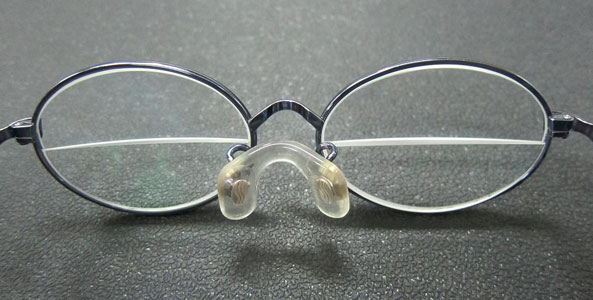 The Franklin Lens is suitable for such users that…

TOKAI manufactured a lens using the “Smooth line Process” to answer to inquiries requesting for “a thinner lens”, from users with strong myopia.

In addition to this problem of the looks of the glasses, when the myopia is too strong, it can even become hard to find a lens that can be made for the user.

To answer to these inquiries for a thin lens, even for a strong myopia, TOKAI has a processing method to manufacture the edge of the lens thin as possible.

This processing method is called the “Smooth line Process”.

In this process method, first a lens is made in the standard method, than handcrafted to sharpen the edge, using many different types of tools. There are cases in which even the tool must be made by hand to proceed in the sharpening of the lens.

The visual of the lens improves by shading off the border of the part in which the lens is sharpened and the part where the power is on the lens meets.

The smooth line processing is suitable for such user that…

Examples made with the “Smooth line Process”
These are examples actually made by TOKAI in the past.
S-27.00
S-24.00

These are high power lenses that can not be made in the standard production, but TOKAI will try to answer to these request by recommending the most proper solution for the user, together with the user.

In the near past we had a inquiry whether TOKAI can produce a thin and light lens for a extremely high hypermetropia child that needed a lens far beyond the standard production range. We made it using a biconvex lens.

In the standard range of up to +15.00D at TOKAI, the lenses used to treat hypermetropia are called the “positive meniscus lens” which has a convex surface on the front and a concave surface on the back.

The lens which TOKAI suggested was,

The reason why we did not suggest the meniscus lens is,

In this specific case we decided to make the biconvex lens to make the lens thin and light as possible. We thought that since the wearer was a child, the weight of the face, and how it looks will effect strongly to the stress.

How to produce the biconvex lens.

The Biconvex Lens is suitable for such users that…