New types of lenses that are good for night driving

Graduated from the Kikuchi College of Optometry.He aspired to be a specialist in vision care during his days in college as he studied topics such as eyeglass regulating and visual physiology.
He joins Tokai Optical on the advice of his professor.
While firmly believing that the development of eyeglasses is half medical care and half business, he continues to engage in research on spectacle lenses from various angles in the pursuit of vision care.

In recent years, we have been getting more requests from those who experience glare from the headlights of oncoming vehicles and refractions from mirrors at night.
Many of them are elderly drivers, and not necessarily people who drive at night for work such as taxi drivers.This is because the light from the vehicles scatter inside their eyes, where it has become cloudy white due to cataract, which is a condition related to the aging of the eyes.
In response to such problems, we began developing lenses that are suitable for driving at night. 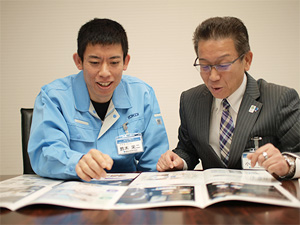 What we first got to work on was research on headlights, which are a cause behind glare.Upon conducting spectral measurements of the headlights of over two hundred cars on the road, we found that they can be classified into three major types.48% were halogen lamps, which are often used in older cars, 49% were discharge lamps, which are in newer cars, and the remaining 3% were LED lamps.
We found that these discharge lamps produce powerful masses of mono wavelength light and that they tend to make us subjectively experience glare.
We adopted the developmental policy of aiming to effectively cut out wave lengths of light that are powerfully emitted from discharge lights and making a shift from the light colors of discharge lamps to warmer colors that are gentler to the eyes.
The objective then became the creating of lenses that suppress changes of color in the users’ eyes as much as possible.The theme of our lens development at Tokai Optical is “to see, to be seen, and to be able to see better”. 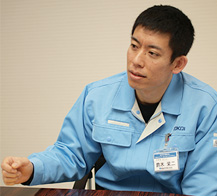 Color lenses are generally made with a method known as tinting, where their surface layers are saturated with colorants.However, we have adopted a method of mixing colorants into the lenses because it is difficult to effectively cut out only specified wave lengths with tinting.
The method of mixing is not suitable for producing lenses that have power because contrasting densities form due to the inherent indentations of the lenses.It also takes an entire day to make a single sample with mixing.
However, we have decided to stick to this method in order to clear every item in the theme that we have launched.
As a result, it took us half a year to find just the right combination of colorants that we had been looking for upon experimental productions of lenses with over twenty types of colorants.
By making this effort, we have been able to develop lenses that can effectively cut out light from discharge lamps. 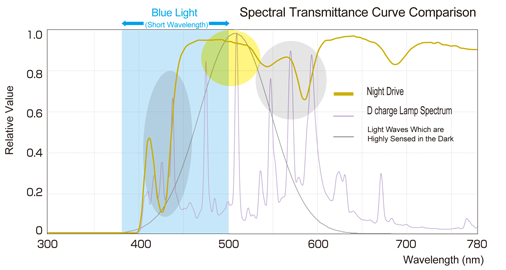 However, there is one conflicting factor here that cannot be overlooked.It is the fact that lenses that completely suppress glare from the headlights of oncoming vehicles make it difficult to drive because one’s own lights cannot be seen anymore.
That it where the concept of not cutting out necessary light comes in.In the darkness, people’s eyes perceive light of around 500nm as the brightest.
We decided to let in sufficient amounts of this light and to cut light out only to a certain degree while making a shift to warmer colors of light because we found that bluish white light is perceived as glaring light.After adding some improvements and getting positive feedback on their comfort from our employees, we had local taxi drivers give them a test as they drive a lot at night.
Most of the feedback was positive but some said that they mistook the colors of traffic lights and turn signals because the street lights looked bright yellow or that they were difficult to use because it was too dark when going outside.

The feedback from the taxi drivers during the second test was extremely good after some more fine adjustments were made.
The lens that was finally released then was the Actiview Night Drive.
It is characterized by its anti-glare effects, brightness, and fashionability, which are features not found in conventional lenses on the market for driving at night.
Actiview Night Drive will be an asset to you not only when driving at night, but also on rainy days when visibility is poor and light tends to scatter, as well as when you want to see objects clearly under bright lights such as at convenience stores when the light is glaring and outdoor environments such as concerts and soccer stadiums.
This is a lens proudly presented by Tokai Optical that fully incorporates our own technology, which cannot be found anywhere else.
Please be sure to give Actiview Night Drive a try if glare has recently become a problem for you or if you drive a lot at night.